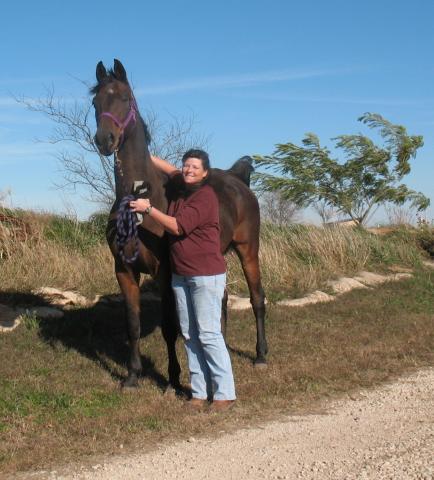 "Got a ladder?", was often heard when approaching this 16h 3" tall Saddlebred gelding that arrived at Rainbow Meadows in July 2009. Loss of job coupled with chronic and painful illness came to burden the kind and sweet owner of Danger, whom referred to as Big "D". This loving giant was an experienced show ring competitor and behaved like a perfect gentleman even though he spent every previous day of his life in a stall in a Saddlebred show barn. He was visually impaired in his left eye, but was a regal riding partner to his new adopter. Big "D" passed over Rainbow Bridget in July 2010 as the result of a stroke. From his adopter: Danger Bay was a gift to me, I believe, from my PERFECT HORSE "Trucker" to show me that even though my heart was grieving his loss, I still had enough love to give to big "D" for his short time on earth. I will miss going out to the pasture and before I said anything he would look up and nicker and be the first one to the gate. His buddy, Squirt, misses him also. Wherever "D" was, Squirt was close by. I think Squirt acted as D's seeing eye pony. "D" was losing sight in his other eye but he never felt he couldn't see. He will be missed by Squirt, Mia and Newman, but, most of all me. I know he felt loved at the end because I never left him and my hand was always on him letting him know I was there. I know he is in green pastures with Trucker being able to see everything and no longer hurting. My heart will be heavy with grief but also filled with love for a wonderful friend.