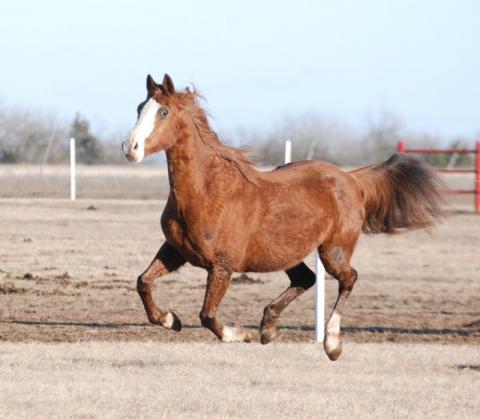 Dolly came to Rainbow Meadows in the most dire condition of any horse to arrive here. Saved by two wonderful volunteers who trailered her in from Missouri, Dolly had almost nothing left in her. So thin and so weak, she couldn’t even stand for the three-hour trailer ride to the rescue. For the first days, she spent much of her time lying down, and could only rise when given the assistance of being hoisted up with a tractor. But by less than two weeks later, she was already trotting, gaining weight and healing from her wounds caused by her struggling as she laid in the trailer for transport. Her recovery was a long one, but she proved that she had a true zest for life for the time she spent at her forever home! From Dolly's adopter, Amy Bayes: I have known many horses in my life and I have loved them all, but Dolly was different. After 20 years of having no horses, Dolly's tragic story of starvation and abuse touched our hearts and we decided to adopt. She was suppose to be for my daughter, but from the first moment I saw her I knew she was my heart horse. During Dolly's time with us she became a patient teacher to my children and my best friend. I would often take her out in the early summer mornings before anyone was up and we would ride down abandoned dirt roads as fast as we could, Dolly loved to run. My husband watched us once and said he didn't know who was smiling bigger, Dolly or me. Unlike most horses Dolly didn't seem to want to hang out with her pasture mates, so instead she would roam around the yard when were outside, watching the kids play or quietly munching on grass while I worked in the garden. It seemed as if she was the final puzzle piece that made our family whole. We lost Dolly on a cold, rainy day. I came home from work and found she had not ate all her food. I looked everywhere for her and soon became frantic when I couldn't find her. Suddenly I heard a soft whinny. Dolly was in the far corner of the pasture laying down. She acted as if she couldn't get up even though she wanted to. After a great struggle my husband and I got Dolly to her feet. She was shaking and her neck seemed to be at a strange angle, she acted like she didn't know how to walk. We got her in a stall, the vet came out, said to wait and see, but told us no more. Later the evening I went out to check on her. She was laying down in her stall, she was stiff and she was shaking again. I jumped into the stall and called the vet, he said she was having another stroke. He had hoped she could recover from the first one, but now there was no choice he would have to put her down, but that never happened. As I held Dolly's head in my arms tears rolling down my face I thanked her for coming into my life, I told her how much I loved her and then she closed her eyes for the last time. I was devastated by Dolly's death, and thought I would never let a horse in my heart again, but I knew that is not what Dolly would want. So instead Dolly has inspired my family to help as many horses as we can by helping horse rescues, campaigning against horse slaughter, and taking in as many rescued horses as financially possible. Dolly changed our lives, and now in her memory we hope to change other lives as well. Wait for me at the Rainbow Bridge Dolly, we will ride together again someday, I will love you always.