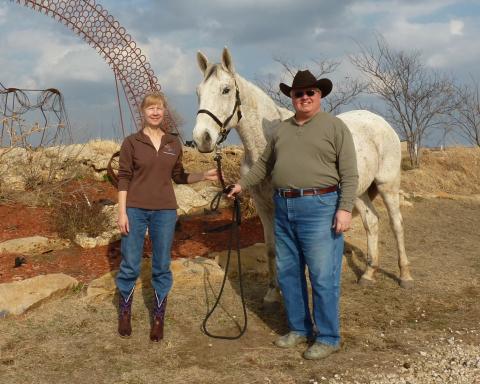 Standing at 16h2”, Fancy is a calm, warmblood mare. While much of her back story is uncertain, one thing is not – that she is an experienced dressage mare with a lot of time in the ring. Rated in early 2011 as a solid Level 2 by an expert dressage competitor, even after more than two years of not having been ridden and being both out-of-shape and underweight, Fancy proved that she had not forgotten her job. Fancy came to Rainbow Meadows Equine Rescue and Retirement, Inc. after the rescue facility she had previously been under the care of was shut down by authorities as a result of reports of animal neglect and cruelty. Fancy is a calm, friendly mare who enjoys attention. She is blind in one eye but shows absolutely no evidence of anxiety associated with her blindness and still performs excellently. She has gone on to be a wonderful riding partner for her new adopters!