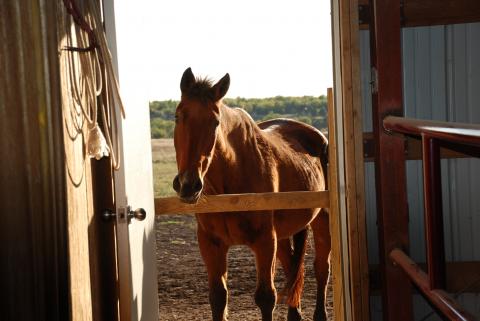 From Karen Everhart: Moose came to Rainbow Meadows Equine Rescue and Retirement, Inc located near Sedan, KS in December 2005. He had suffered a significant stroke a few months earlier. His previous owners saw him lying in the pasture and thought he was dead....and drove on by. A few days later they noticed that the "body" had moved. Upon investigation, they realized that the horse was not dead after all. To their credit, they were able to get this big boy to his feet and into a trailer. He was transported to a local Vet who ruled out all possible illnesses and determined, from the ataxia, drooping lip and ear, and lack of response to physical stimuli, that he had had a stroke. After nearly 6 weeks of hospitalization, Moose was ready to return home for rehabilitation. However, his owners made it clear that they were not going to participate in the rehab. Their intent was to toss him back into the pasture though he still did not walk steadily, nor could he eat well, and he was unable to defend himself once he was returned to the herd. Despite the Vet's urging that the owners make arrangements to keep him safe until he was recovered, Moose was doomed to a dismal existence. Having a heart of gold, the Vet offered to write off the bill if the owners would sign the horse over which they did. Then the Vet called Rainbow Meadows and asked if we would accept Moose at the rescue. Moose required about 6 months rehabilitation which was little more than being provided a safe pasture to graze and move and not have to compete for his food. Once his recovery was assured, Moose was given the opportunity to become the resident "baby sitter" for all the new babies which arrived at Rainbow Meadows without their moms. He taught them to be respectful of other horses. He taught them "horse manners" and he made them feel safe and secure. There has never been a better baby sitter to be found.As he aged, Moose continued to teach the young ones the lessons necessary to be successful in a herd but with each passing year, Moose had opportunity to just "live like a horse" on the 240 acres of rocky, rolling Flint Hills pasture at the rescue. You could set your clock by his appearance at the barn for breakfast and dinner. He never missed a meal. Unfortunately, on September 1, 2012, we lost Moose. He had stopped eating 3 days earlier and despite numerous attempts to try and stimulate his appetite, he was not interested. He never appear in pain, but he was sending us a clear message: "I am tired and I want to go home" Go home he did. Moose laid down under a tree, surrounded by his pasture mates, closed his eyes, and went to a peaceful sleep. His life ended with great dignity. We are blessed that we did not have to make the decision to put him down. It would have killed us to do so. Moose was an icon and we are so glad that God sent him to us so we could provide his the respect he deserved. *Also there is a poem on the old site in the memorials for him.