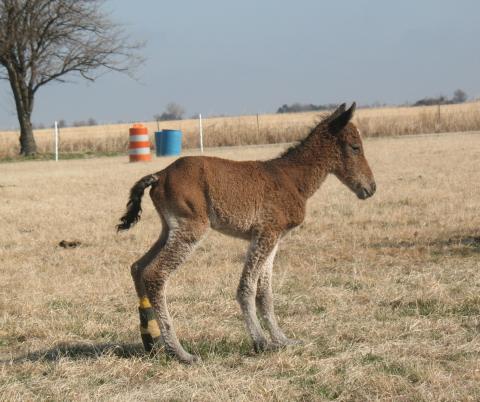 Seized in a rural Kansas cruelty case in March of 2009, 8 horses (one pregnant) were found neglected and at great risk. Severely emaciated, heavily parasitized, lice infested, and virtually untouched, the "9 Lives" were found in a 5-acre lot which resembled a public landfill. There were carcasses of dead animals littering the property. There was no food to eat and the only water available was from a contaminated pond. However, they were rescued by Rainbow Meadows and were rehabilitated and trained to trust the humans in their life. Romeo was born to his dam, Juliette, only days after the rescue. Sadly, the neglect and malnutrition were too much for him to develop properly making him an ill foal. Despite the efforts of Rainbow Meadows staff, his body was too weak to survive. On March 21, 2009 he passed over Rainbow Bridge.