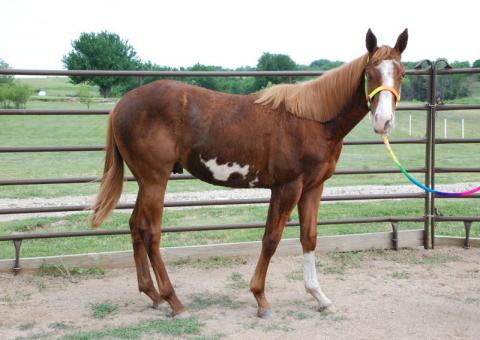 Samson came from a large APHA breeding facility where he spent much of his life stall-bound with limited to no turnout. However, after arriving at Rainbow Meadows, Samson enjoyed the freedom and space to run, grass to eat, and the chance to grow up like a youngster should. Samson was diagnosed with juvenile cataracts that Rainbow Meadows had hoped to have treated before he was lost to a tragic pasture accident. Samson, dear boy, you will be missed. From Karen Everhart: It is with incredible sadness that I share the news of a tragic loss here at Rainbow Meadows. Tonight, as we were completing evening chores, we watched Samson, a coming 2 year old, run and play in anticipation of his dinner. We were commenting that it would be hard to ride such an athletic horse when all of a sudden Samson slipped and fell. He jumped right up and I knew immediately that he had broken his leg. We grabbed his halter and stopped him within a very short time of the accident. I felt sharp boney points under the skin and could move the leg, below the knee, side to side. I knew this was a horrible accident. Our Vet was here within an hour and confirmed our concerns. The cannon bone and the knee were shattered. We had no choice but to humanely euthanize him. Samson was such a sweet and trusting boy. The accident happened in less than a second yet it cost him his life. Hug your horse at your earliest opportunity. They can be gone so quickly.