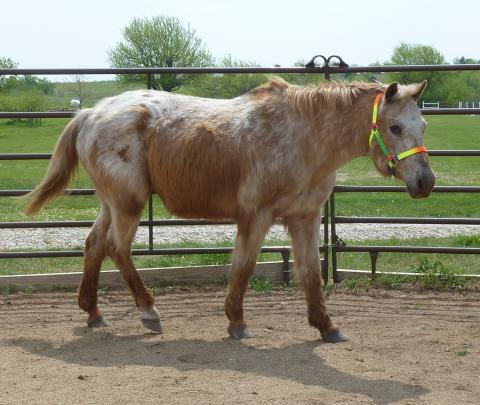 Sarge looked like an old crusader when he arrived at Rainbow Meadows in February 2010. A red Appy with a graying face, he had legs that were too short, a body that was too long and an oddly shaped head. Still, his adopter saw the gem of a heart that he carried and the two enjoyed fine times together. When illness and life challenges forced her to return Sarge to Rainbow Meadows, he came with a diagnosis of Cushing's (PPID). Sarge's condition was carefully managed with a veterinarian and he was loved dearly by a foster home that took him following his return, but finally, severe laminitis developed as a result of the disease and his pain could no longer be controlled. His was released from his suffering and sent to run the pastures of Rainbow Meadows.