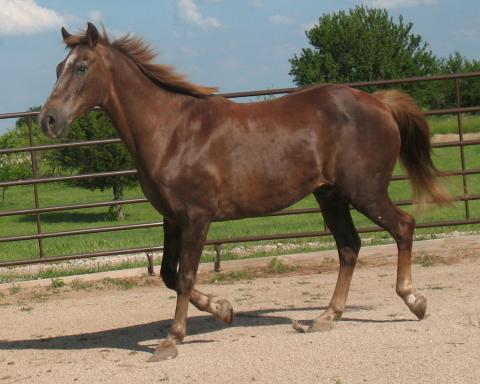 Shag was purchased with fellow gelding, Pepper, at a kill sale in the early 1990's in Arkansas by a wonderful couple who were involved informally in the rescue of dogs and cats. The gelding lived with this couple until the downturn in the economy caused foreclosure of their residence. A widespread effort was made by various rescue agencies to find homes for all the dogs, cats and horses. Rainbow Meadows agreed to step in to care for Shag and Pepper and find forever homes for these great guys. Shag passed over Rainbow Bridge on June 13, 2010 following a pasture accident that left him with a fractured hind leg. From his adopter: You’ve heard of love at first sight… well, when I visited Rainbow Meadows, I knew right then I wanted to take him home with me and love him forever. He had a wise look in his eye and the calm, settled look I was hoping to find in a horse for my not-so-young years. At our farm, he discovered many new animals and treated them gently. He sometimes let himself get pushed around, but let me be his champion, making sure he got his share of the food and attention. That awful morning, Shag didn’t come for his breakfast. Finding him with a leg held gingerly in the air and so much swelling, my heart began to sink. A call to the vet and soon my worst fears were confirmed. Shag’s leg was broken and the only thing to do was to free him from the pain. As I had promised his former owners, I stayed with Shag until his gentle heart stopped beating, rubbing his cheek and letting my tears fall just like the rain that was pouring down. God was crying with me as I helped my Shag pass over the Rainbow Bridge, taking a piece of my heart with him.