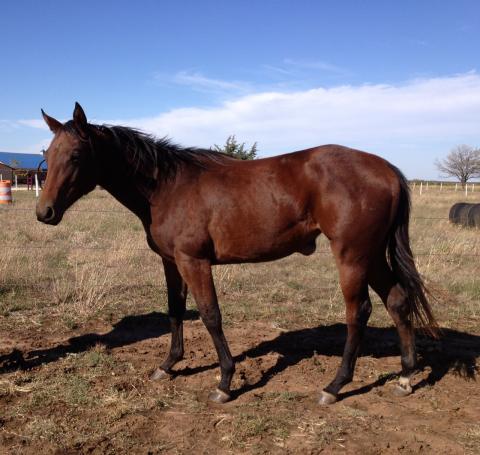 Abandoned in southeast Kansas rural county, this young filly was found with multiple injuries and a significant hernia. Her behavior indicated that she had had minimal if any handling, but she proved to be sweet, kind and curious in the short time she was with us. A fundraiser was held to quickly raise money for her hernia surgery, but she was euthanized during the procedure when extensive damage from complications related to the hernia were revealed. From Karen Everhart, on the day of Siri's scheduled hernia repair surgery: Unanswered prayers...As I stood at the observation window of the surgical suite I offered a prayer of hope and healing for this sweet filly. She came to us needing a safe refuge, which we offered. She showed us such trust despite the obvious trauma she had suffered at the hands of uncaring people. We fell in love immediately with her sweet nature and loving spirit. When the surgeon invited me into the operating room to view the damage which had been created by the constriction of the hernia, my heart became very, very heavy as I knew she would never be without great pain. There was no way to resect all of the damaged tissue and leaving it would mean she would suffer repeated and severe bouts with colic. I could not do that to her regardless of how difficult it was to kiss her face, there on the table, with tubes down her throat and IV's in her neck. I wanted to have them close her up so I could bring her home, back to her pasture. I wanted her whole and healthy .......but it was not to be....... God did heal her quickly and painlessly but not the way I wanted. The sadness is overwhelming tonight. It never occurred to me that Siri would leave us today.