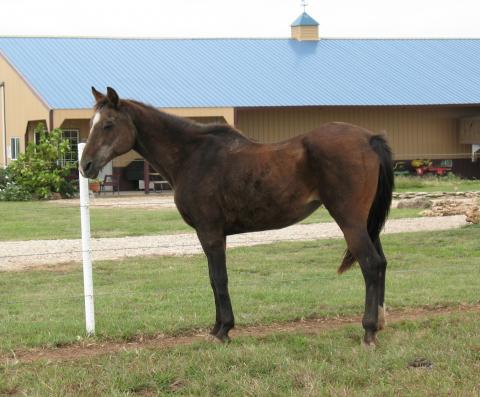 Sweet Pea arrived with Raven (who was later adopted out to her forever home) as the most emaciated horse the Rainbow Meadows staff had ever seen. Both were to be sold at a killer auction, but Sweet Pea was so thin that the killers refused to trailer her to the slaughterhouse in Texas. The instructions by a seller were to "take her out back and shoot her." Instead, she was saved by two generous Rainbow Meadows volunteers. She arrived with an extremely advanced abscess in her jaw and has severe calcification her rear fetlocks, but they do not cause her any noticeable pain. The staff worked tirelessly to bring Sweet Pea back to good health. She was been ridden on numerous occasions at the ranch, and proved to be a reliable mount to even the more inexperienced of riders, including children. She passed over Rainbow Bridge on April 23, 2010 at 35+ years of age as a result of natural causes.