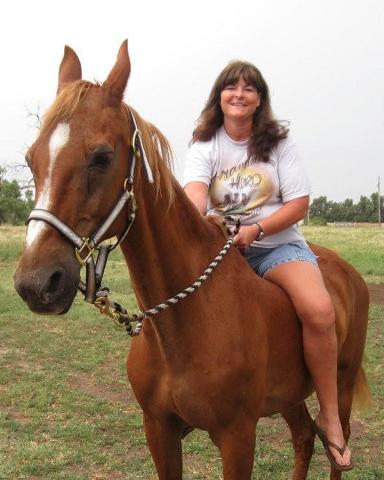 The Rainbow Meadows family lost one of its own in the fall 2009. On October 14th, Trucker - a steady Saddlebred who came to the rescue in a state of severe emaciation - died of rapid onset congestive heart failure. His loving adopter, Darla, was with him at the clinic until the end, when his heart simply gave out. Darla adopted Trucker in March 2009, along with another rescue, Mia. Trucker was a wonderful partner for Darla, restoring the riding confidence she had lost in a terrible accident. Just the weekend before, they had participated in a Reins of Hope benefit trail ride. He had behaved like a gentleman, and had truly become her perfect horse! One often fails to understand why things happen, but it is important to remember to have faith. Trucker gave Darla a precious gift - that of trust and confidence. Darla gave Trucker the gift of love. It was a match meant to be!