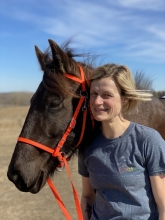 Katja was born and raised in Germany but has been living in the US since 1999. She received her Bachelor of Science in Psychology and Associate of Arts in Italian Studies in 2004 through the University of Maryland University College and her Doctorate in Physical Therapy from the University of Nebraska Medical Center in 2010. Her love for horses began at a very early age, but it was not until after she became a working professional that she was able to make her dream of taking riding lessons and owning a horse a reality. Katja stumbled upon Rainbow Meadows in 2014 while searching for an adoptable horse. She was able to adopt Shasta, and the two of them spent over 6 beautiful years together until a tragic accident sent Shasta over the Rainbow Bridge.  Katja then adopted Halle from Rainbow Meadows in 2020 and was also finally able to become more involved as a volunteer following the rescue’s relocation to Junction City, Kansas. Katja recently became a Certified Natural Barefoot Trimmer through the Oregon School of Natural Hoof Care. She lives in Lincoln, Nebraska.