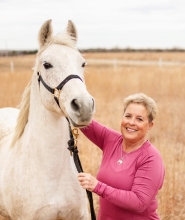 Karen Eastman Everhart MEd spent most of her weekends and summers as a youngster on a small farm in southeast Kansas.  There were always horses present to assist with working cattle and wherever the horses were, there, too, was Karen.  Her passion for horses never died despite the distractions of high school, college, career and family.  In 1981 Karen purchased her first horse, a Palomino mare she named Rainbow.  Anticipating retirement, it was Rainbow which drove Karen to seek property where her beloved mare could run on an abundance of land.  And it is in her honor that the ranch was named Rainbow Meadows Ranch.  Unfortunately, at the age of 32, Rainbow broke her hip after stepping in an Armadillo hole.  Despite significant efforts, Rainbow could not recover from her injury and had to be humanely euthanized.  Rainbow was laid to rest at the ranch and watches over all of the horses which reside here.  Karen currently owns a personal herd of 12 horses.Karen's post-graduate educational studies focused on exercise physiology, biomechanics and wellness.  She spent the majority of her professional career in health care as a medical administrator and was a part-time fitness instructor for over 28 years.  In 2000, Karen founded Horse Calls, LLC, a program of equine management consultation, Centered Riding instruction, and horse training. Her love for horses led her into Competitive Trail Riding in the 1990’s.  She has successfully competed in distance events sanctioned by the North American Trail Riding Congress (NATRC), the American Endurance Ride Conference (AERC) and the Arabian Horse Association (AHA).In late 2005, Karen and her husband, David, founded Rainbow Meadows Equine Rescue and Retirement, Inc. as a facility for abused, neglected or abandoned horses as well as sponsored retired horses.