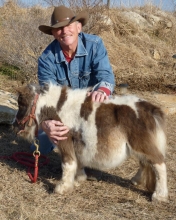 David grew up in a small community south of Wichita, Kansas.  His suburban lifestyle did not lend itself to the development of an appreciation for ranch life, but his summer visits to his grandfather's dairy farm in Wisconsin did.  After high school, David attended Wichita State University before joining the United States Marine Corps.  He served in the Air Wing while in Vietnam and Japan.  His love for military aircraft eventually led him to the Kansas Air National Guard.  There he continued his career and, after 38 years of military service, retired as a Chief Master Sergeant in January 2005.  When David met Karen in 1981, she had one horse and wanted another.  In order to impress her he agreed to share in the purchase of her second horse.  Over the years they added additional horses to their personal herd and now have established the rescue.  If you ask him, these days David serves as Chief Stable Master and Maintenance guy. In reality, he is an irreplaceable part of the rescue's daily operations, and has a special place in his heart for every horse that walks through the gates.